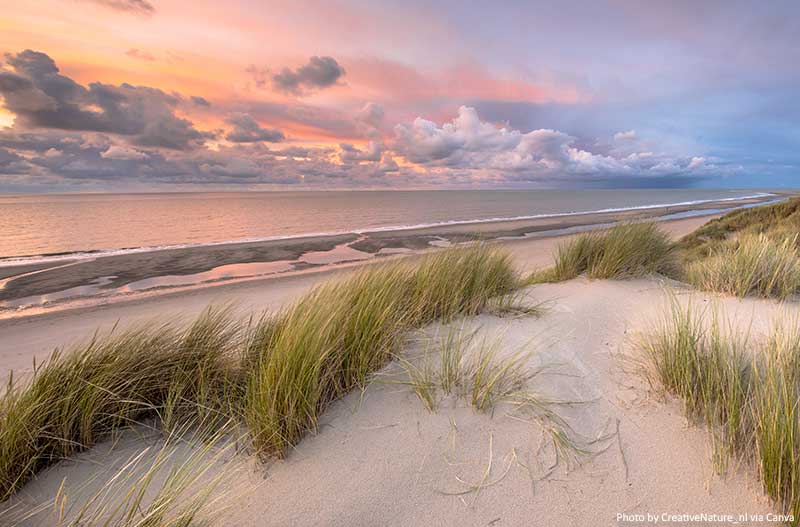 A Brief Guide to the Dutch Wadden Islands

In an urbanized country like the Netherlands, it sometimes is hard to find untouched nature. However, the trained eye will spot fragments of beautiful nature.

Off the mainland in the north, an island group is clustered together in the Wadden Sea. The Wadden Islands are adored for many reasons; the most hours of sunshine in the Netherlands, extensive beaches, scenic cycle routes, and wildlife unique to this region are just some of them. We’ll take you on a journey across the main Dutch Wadden Islands, from Texel in the west to Schiermonnikoog in the east.

The largest Wadden Island lies closest to the mainland and was even part of it until the All Saints’ Flood in 1170 created Texel. The western shoreline of Texel is proclaimed as the Dunes of Texel National Park, where you can find dunes, empty beaches and many bicycle and walking trails. Make your way up north to see the grand Eierland Lighthouse and its wide beach.

In EcoMare you’ll have a chance to meet some of the islands’ cutest inhabitants. This museum and sanctuary provides shelter to wounded seals and porpoises and has exhibitions about other flora and fauna in the Wadden Sea.

Texel is well-known throughout the Netherlands for its brewery, the Texels Brouwerij. This craft beer brewery is located on the southeast of the island and is open for tastings and guided tours.

The Wadden Sea is home to several species of seals, and one of the most engaging things to do in Vlieland is a ‘seal safari’. With a speedboat, you’ll go on a journey to the sandbars where the seals tend to hang out, and a close encounter with these creatures certainly is a memorable experience.

Vlieland has long-stretched, gorgeous beaches on the south part of the island, which are ideal for adventure sports. Some exciting ventures include riding a blokart and power kiting. The beaches and forests invite for horse riding as well, with special bridle paths and scenic views along the way. You won’t be bothered much by cars, for only inhabitants of Vlieland are allowed to drive a car on their island.

If you happen to visit Vlieland in September, try to get a ticket for the music festival Into the Great Wide Open. Visitors get indulged in concerts in the open air, poetry and art exhibitions. 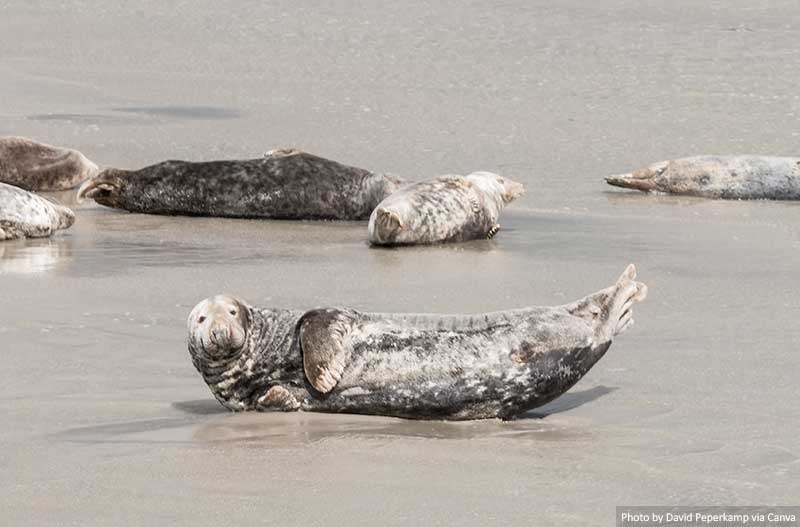 For its small size, Terschelling has an incredible variety of sights and activities. From museums to delightful walks, and culinary events; Terschelling spoils even the pickiest visitor. You can sample locally produced cheeses at the Pieter Peit’s Hoeve, a farm dedicated solely to making cheese. During a tour, you’ll learn about the cheese-making process, and get a taste of their own produce.

A 15-minute walk from the dairy farm lies the Wrakkenmuseum or Wreck Museum. The owner has converted a traditional farm into a collection of maritime items, dug up from the Wadden Sea around Terschelling. The exhibition shows complete shipwrecks, items found on century-old pirate ships, and washed up pieces.

Terschelling is also the epicentre of outdoor amusement; there are many walking trails, you can watch seals on a boat excursion, or even go on a guided walk on the tidal flats. This is quite a unique event since you’re basically walking on the bottom of the sea. Visiting the tidal flats is considered to be one of the trademark experiences in this part of the Netherlands.

Art lovers, plan your visit to Terschelling carefully. Every year in June, this island host Oerol Festival, a creative carnival of music, talks, circus acts, poetry, and a whole lot more. Shows are scattered across the island, so a bicycle is a helpful and fun way to travel from one performance to another. 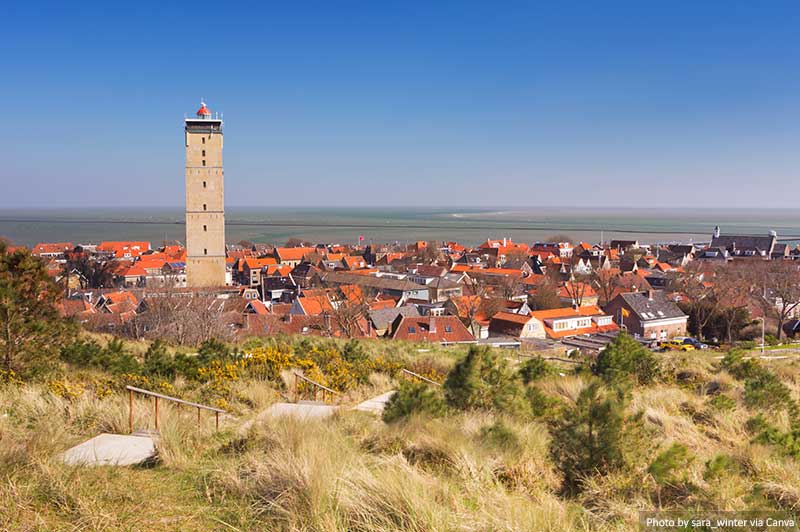 The fourth island is primarily a suitable destination for adventurous travellers. From the airstrip in the west of Ameland, a small aircraft can take you on a sightseeing flight, and you can even do a breathtaking skydiving jump. From 3000 meters up in the sky, the views of the islands and the surrounding sea are priceless.

Another exciting activity to go to Ameland for, is kitesurfing. Especially the northern side of the island which is connected to the open sea, is a prime surfers habitat. Here, you’ll find several surf schools to teach you some skills on the water.

The most substantial part of Ameland is covered by dunes and beaches, making it an incredible place for long walks as well. The Bornrif Lighthouse in the municipality of Hollum is a picturesque destination for a tour. Climb the 236 steps to the viewing deck, from where you can see all of Ameland and even neighbouring islands on a clear day. 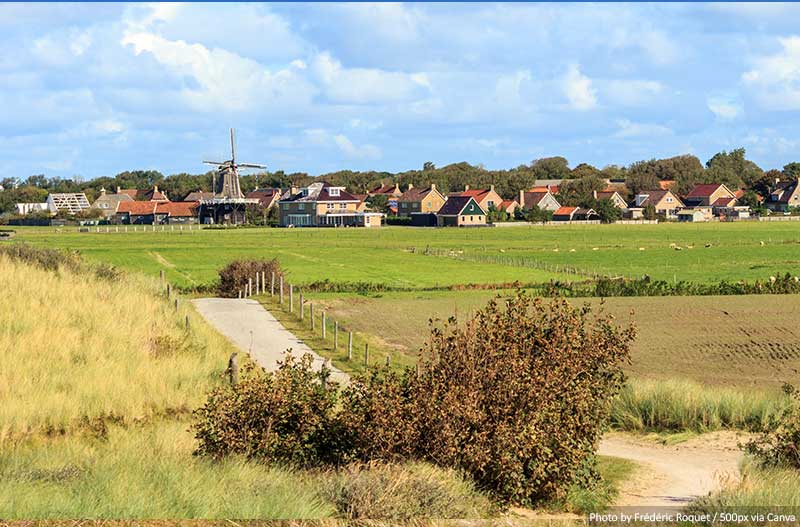 The fifth of the significant Dutch Wadden Islands is considered to be the most peaceful; Schiermonnikoog is the least inhabited of the bunch and is most of all a car-free island. Schiermonnikoog has one village, and the rest of the isle mainly revolves around its nature.

However, it’s worth taking a stroll through the municipality, which is also called Schiermonnikoog. You’ll be able to spot some early 18th century houses, the oldest of them being Huis Marten, built-in 1721. The village also has a colossal whale jawbone on display in the centre, a relic from expeditions to the Arctic in the past.

Just outside the village, lies another witness of the past: the Wassermann Bunker. This concrete fortification was built by the Germans during the Second World War, to protect themselves from the Allies. The bunker is open for the public, and nowadays it functions as a viewpoint over Schiermonnikoog. 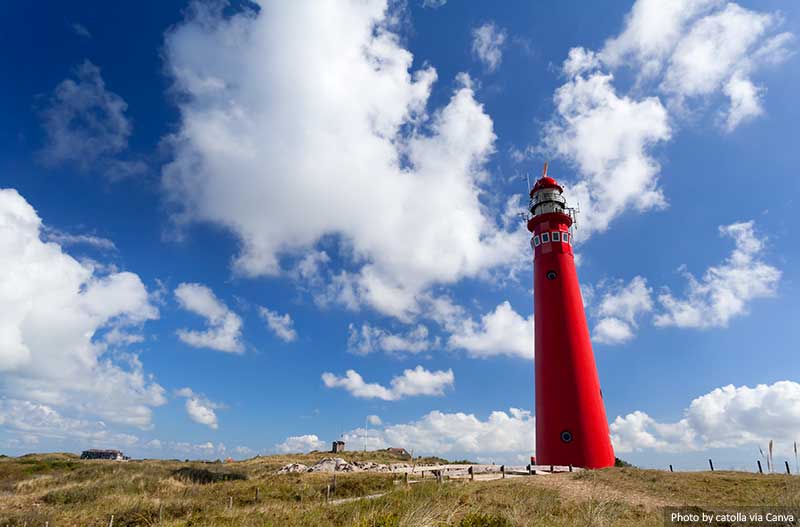 The handful of islands mentioned are the only ones inhabited by people, but most of the Dutch Wadden Islands don’t have any settlements on them. Out of 16 islands, 11 are exclusively home to animals and plants. Many species of aquatic birds either breed here or feed, and seals reside on the islands are all part of the Wadden Sea UNESCO World Heritage listing. The government is quite protective and has forbidden access. The only way to get a glimpse of these ecological paradises is through a sightseeing flight, boat trip, or a spectacular skydive above the Wadden Sea.

How to get to the Dutch Wadden Islands?

All of the inhabited isles are accessible via a ferry from the mainland. The gateway to Texel is the harbour of Den Helder, a town at the tip of Noord-Holland province. This is the most frequent boat service, with departures every hour between 6.00 and 21.00.

Vlieland and Terschelling can be reached from Harlingen in Friesland province. From Holwerd in Friesland, you can jump on a boat to Ameland, while the starting point for a journey to Schiermonnikoog is Lauwersoog in Groningen province.

Island-hopping is, unfortunately, not very convenient. Trips from Texel to Vlieland and Vlieland to Terschelling are limited in the months April to October and only run once or twice a day. Ameland and Schiermonnikoog can only be reached from the mainland.

The Wadden Islands show a different face of the Netherlands. They lack the impressive architecture and historic towns, but as far as rural places and untouched nature go, these are the spots you don’t want to miss during your trip in this European country.

The best season is without a doubt summer when the temperatures are perfect for outdoor activities, and beach-hopping. Also, connections by boat between Texel, Vlieland and Terschelling are available this time – although limited.

We recommend the below options to book your hotels, activities, visas and flights: