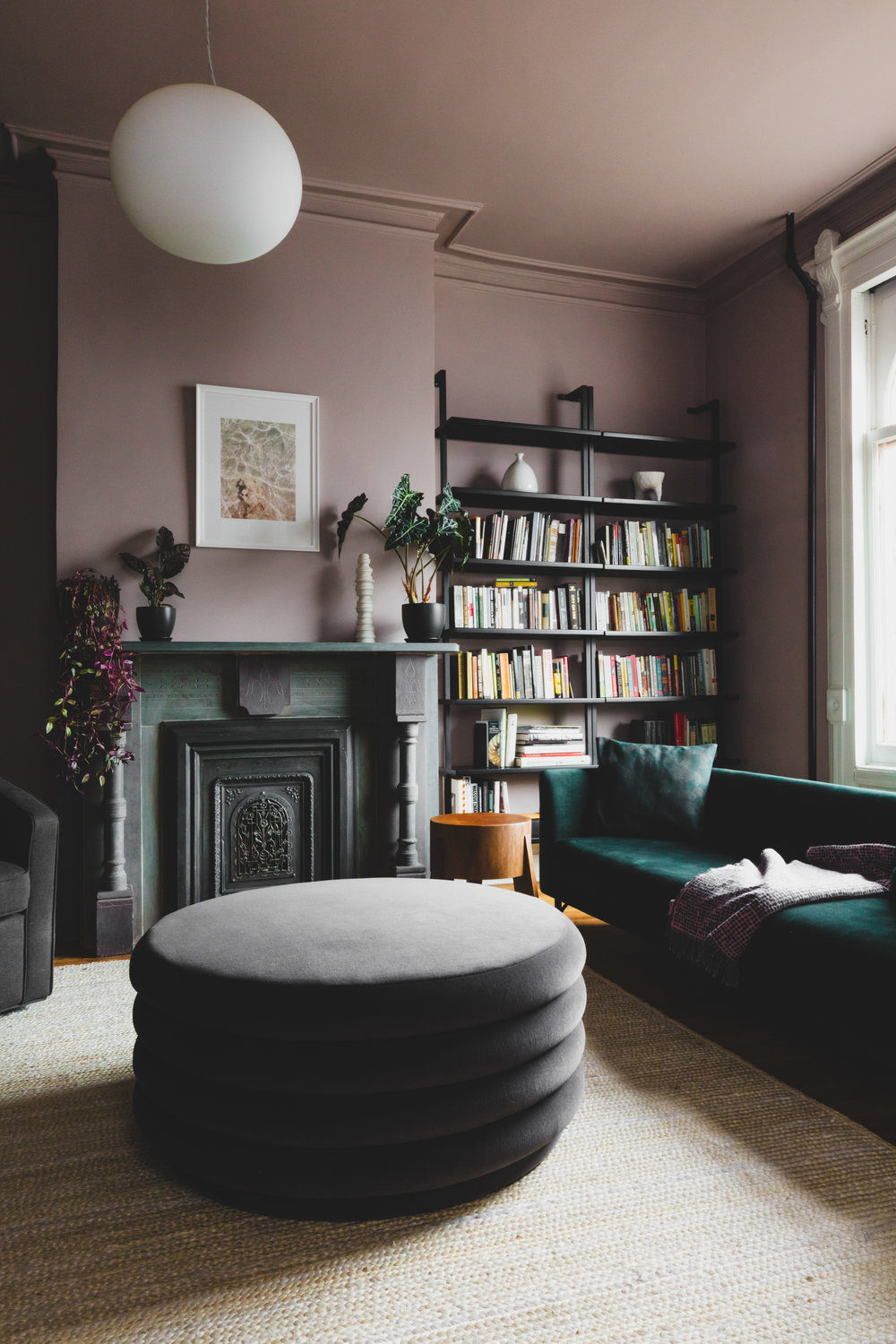 
What happens when two young architects get to be their own clients? Budget constraints are, of course, a given–so things like learning how to hang wallpaper come into play. So does treating the house as a treasure hunt, and finding out what’s hiding under the carpets and painted mantels. And, of course, experimenting yourself with the transformative power of paint.

That’s but a sampling of what took place when, after a year of real estate hunting, Andrea Fisk and her partner, James Klauder, got to overhaul their own late-19th century townhouse in Brooklyn’s Bushwick. “The structure had been barely altered since it was built, which was very appealing to us,” says Andrea, pointing out its original plaster crown moldings, Eastlake-style door and window frames, and lavishly carved stair. But there was also much to do, including flipping the arrangement of the floors: to help pay their mortgage, the couple turned the garden level into a rental apartment. They restored the parlor floor as a living space—it had previously been divided into bedrooms—and reinstated bedrooms on the top floor.

Andrea is co-founder with Jess Thomas of Shapeless Studio, a rising Brooklyn firm with a focus on residential work, and James specializes transportation and aviation designs at Gensler. So Andrea took the lead on the project, and, as with Jess’s own place—see The Sentimental Minimalist—the results serve as a showcase for the work they can do. Come see.

Above L: The couple tiled the entry in a pattern called Agadir from the Cement Tile Shop and painted the walls and door in Benjamin Moore Arctic Seal: “lighter colors make boundaries more visible, so going with a dark color in a small space can have the effect of dematerializing the volume of the room,” explains James. Above R: A glimpse of the living room.”During the construction, we found a funny foundation block signed ‘Sam, Mike, Mickey, 1891,’ so we think they were the builders,” says Andrea, adding “1891 makes sense because we have Eastlake Victorian details and also some touches of Arts & Crafts, and that year was right on the verge between those styles.”

“We were first-time homeowners and right after our closing, I went down a rabbit hole of trying to learn everything I could about our house’s history. It’s so much older than we are and has seen several generations of New Yorkers come and go; I felt as if we had to respect that. In the 1900 census, the house was owned by a husband and wife who had been born in Ireland; they had five adult daughters and a son living with them, all of whom worked as bookkeepers and dressmakers. By 1940, there was a different family of six, and the father was a watchman for WPA projects. We’re excited to be part of the house’s story.”

The room is painted Benjamin Moore Lost Locket—and note that that includes the ceiling and crown moldings for an immersive effect. For cohesion throughout, the window and door frames are called out in white. All of the house’s paints are from Benjamin Moore’s Color Stories collection from its Aura line

Above L: The nuanced color of the slate mantels and their plant motifs served as inspiration for the whole remodel. Above R: The sofa is upholstered in green velvet.

The “self-rimming” sink is the Yeni Klasik from Nameek’s, and the print is by Brooklyn street artist Pixote.

This room is in Benjamin Moore Lilac Hush, “which seems to change from blue to pink depending on the lighting,” says Andrea. The rug is an over-dyed vintage Turkish design from Revival Rug in a dark green selected to”help the slate mantel pop, and to also tie the room to the living room’s emerald sofa,” explains Andrea. Ferm Living’s Mingle Table in charcoal linoleum—”we love linoleum”—and DWR’s Note Chairs were selected to ground the space.

The pull-down faucet is the Delta Trinsic. The backsplash is Daltile’s Keystone Mosaics, a 2-by-4-inch porcelain tile with a slight texture that gets picked out in the light.

The range is the Blomberg 30-inch Pro Style, and the vent, the Prestige Compact Insert, is built into the shelf that runs the length of the room.

The room is in the back of the house and overlooks the giant hemlock tree in the yard.

We recently featured a Shapeless Studio Kitchen Designed Around the Keywords ‘Socal’ and ‘Minimal but Warm.’

Here are more architects’ own quarters:

You Can Attack Your Day, or You Can Let Your Day Attack You