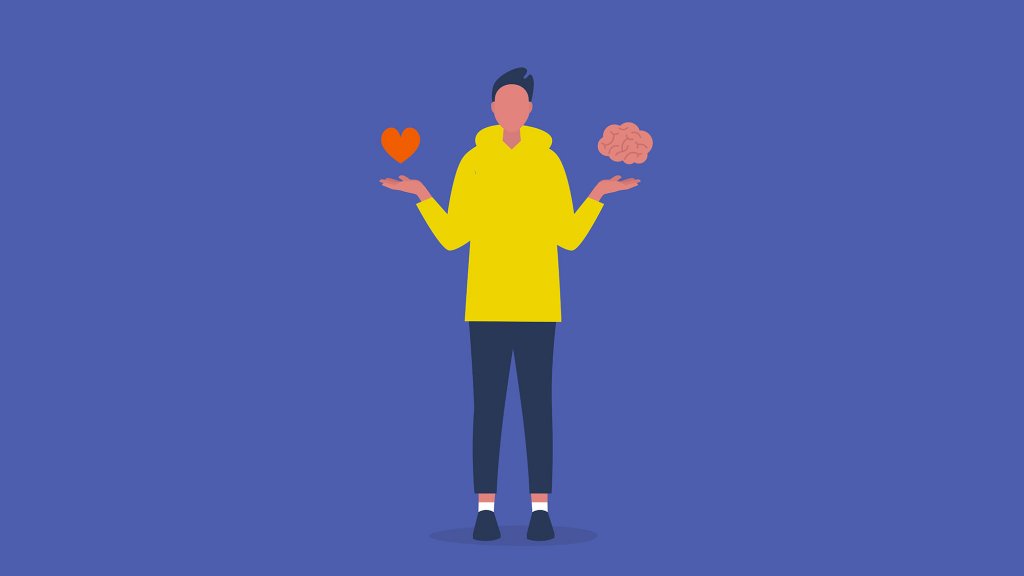 This is a story about an unusual mental trick to improve emotional intelligence. It’s something I’d wanted to try for a while, so I could include it in the next edition of my free ebook, Improving Emotional Intelligence 2021. (You can download the current edition here.)

The thing about this exercise is that while it’s simple and straightforward, it also requires a heck of a lot of courage and self-awareness to accomplish — never mind being brave enough to discuss it afterward.

Let’s go through some short background, and then get straight to the trick.

One of the most efficient ways I’ve learned to improve emotional intelligence is to focus on language — really unpack the go-to words and phrases that you use reflexively, and ask yourself with a clear eye if they truly mean what you think they mean.

Sometimes, you’ll find that the meanings are a few degrees off from your intended effect.

As a classic example, people will sometimes quickly say, “I know how you feel,” when they want to express empathy. But, unpack that phrase, and you can see why it sometimes suggests almost the exact opposite.

In short, most people know in their gut that it takes real effort to really understand someone truly. So, cutting right to the point of “I know how you feel” or “I understand completely” suggests you haven’t actually done the work to try to understand.

Maybe you don’t even understand what you’re missing.

It’s subtle, but it’s there. Better alternatives might be phrases that convey an effort to understand, without implying that you’ve already finished the job, such as: “Tell me more about that,” or else, “I can hear the excitement in your voice; I’d like to know more.”

That’s just one example. It’s worth knowing. But, the three-word phrase I want to explore today is much more powerful.

Don’t say it out loud

It’s so powerful, in fact, that I admit I’m nervous about sharing it. Also (very important!), I’m not going to suggest that you say it out loud.

Rather, just say it silently to yourself, before or during conversations in which you want to train yourself to display greater emotional intelligence.

I haven’t been able to stick to this 100 percent, but for the past month or so, before I’ve gone into a lot of conversations, and Zoom calls, and online exchanges — even very short interactions at the supermarket — I’ve tried to think this phrase to myself before speaking.

You see why I don’t actually suggest saying it out loud all the time, right? Things would get weird, fast.

However, it is uncanny how just thinking this way about your relationship with people improves things as a result.

For my sanity and vanity in this article, I have to clarify that  I’m not talking about romantic love. I didn’t fall in love with the cashier at the grocery store, and I don’t want anyone to read this column and get the wrong idea about focusing romantic attention where it’s not wanted.

Instead, I’m talking about an overall, platonic love for fellow human beings. I found that doing this habitually triggered several natural behaviors — all of which happen to be the kinds of things that people with high levels of emotional intelligence do.

Let’s start with something that resulted from the pure comedy of this exercise. Sometimes, I would nearly laugh out loud, as I remembered to think “I love you” before interacting with people. My thought process went something like:

I’m telling you: When you’ve spent a few quick seconds going through that thought process before the cashier has even asked you if you want paper or plastic, it changes things.

You’re going to be more patient, more conscientious. Even if you don’t wind up asking any of the things you’ve been thinking as you quickly focused on the other person — focused in a polite, attentive, welcome way, I emphasize — they will likely see that they have your attention. You convey that you care.

It’s key attribute of emotional intelligence, and their perception of you, in turn, will be much more positive as a result.

Next, let’s talk about not talking. Emotionally intelligent people know the value of patience and quiet, and when you’ve conditioned yourself to feel even a small amount of platonic love for people before interacting with them, it makes patience and silence very easy.

I think there are two reasons.

First, when we find ourselves forgoing patience, it’s usually because either we feel challenged, or else it’s to fill a conversational void. Both of those circumstances involve the dynamic of your relationship with the other person.

But when you’ve literally just told yourself, “Remember, I feel platonic love for this person, so I’ll treat him or her accordingly,” it can short-circuit that whole dynamic. Insults, challenges, and even the need to fill the silence can evaporate.

It’s the difference between:

I think there’s also an added element, too. Even if you never say these three magic words aloud (remember, just to yourself)–and even if, of course, the other person has probably never said them to you–some part of your subconscious naturally assumes that if you feel good feelings toward them, they’ll be reciprocated.

I think you’re going to find that it’s much easier and more natural to engage in active listening techniques when you’ve conducted this little exercise.

It’s probably related to the “focused attention” I discussed above, but it’s a bit different. That element is about leveraging the natural curiosity that you’ve inspired in yourself; this is about developing a real interest in what the other person thinks or has to say.

That’s going to lead you to use other-centered, emotionally intelligent phrases — the kinds of things that lead you to have what some people call “support reactions” as opposed to “shift reactions.”

And so on. It’s one of the keys to emotionally intelligent conversations: removing considerations of ego and emotion that can trip you up, and being cognizant of how ego and emotions on the other person’s part can prompt them to act and react.

“I want to remember to…”

I realized two things after doing this for a while. The first is that the germ of the idea goes back more than a decade for me, to a conversation I had with a fairly young Army officer when I was a reporter in Iraq.

This was a very quiet, thoughtful man who had seen a lot of fighting both there and in Afghanistan. He’d been separated from his wife and children for long stretches of time, and frankly, he seemed to me like he’d been to hell and back, more than once.

We had a long conversation, and we talked about why he didn’t get out of the military. I remember that he said the number-one reason was: “At the end of the day, I love Joe.”

(“Joe” being all-purpose slang for every soldier in a military unit.)

Granted, the military during a war is a bit of an extreme workplace, but I remember thinking how things might be different, if the top reason people went to work every day was because they loved all their coworkers — and weren’t afraid to say it.

The second thing I realized is that in this context “I love you” is really shorthand for things like, “I want to remember to act in an emotionally intelligent manner,” or else, “I need to remember to act here in a way that will engender positive feelings.”

And, since we’re being practical about this, and probably thinking about how improved emotional intelligence can help in a professional or business setting: “I want to remember to act and react in ways that help move us closer to our objectives.”

I don’t know if I could keep up this exercise long-term. For one thing, sometimes things are better left unsaid, even to yourself, and for another — well, it’s kind of exhausting to be “on” like that so often, hypersensitive about the nature of your relationship with so many people that you meet.

But honestly? That’s O.K. We’re all only human.

And if going through an exercise like this trains you to react a little bit more automatically in an emotionally intelligent way, then I think that means the trick works.