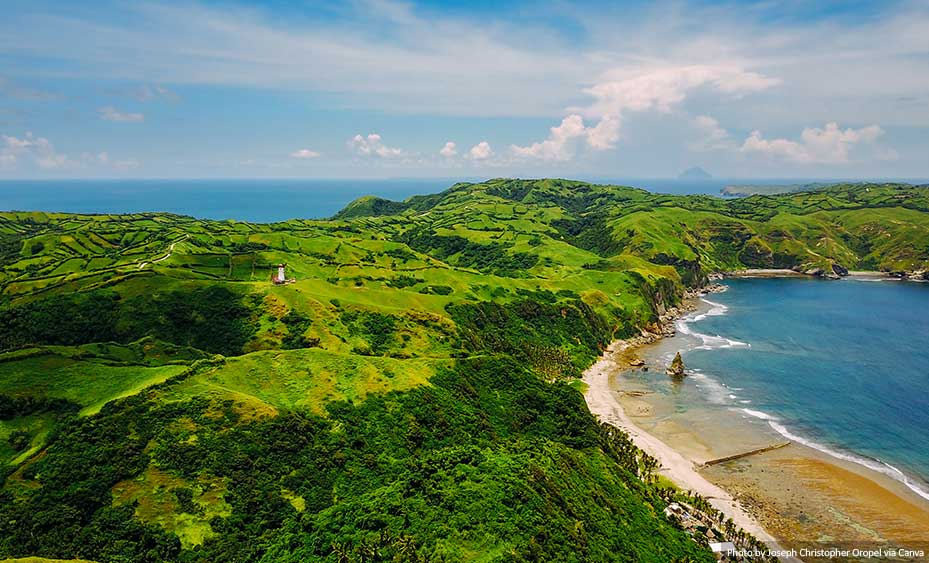 A Guide to Batanes, Philippines

Nestled in the middle of the ocean between the island of Luzon and Taiwan, Batanes is the northernmost archipelago of the Philippines. This rugged group of islands is shaped by volcanic forces and strong typhoons. It has left a unique landscape perfect for travellers who want to see a different side of the Philippines. In Batanes, you’ll find rolling hills, brilliant rock formations, boulder beaches, and stone houses which protect the people from the storms.

With our guide on Batanes, you can read about the highlights of this tiny group of islands, and how to get around on the three main islands Batan, Sabtang, and Itbayat.

Being the largest and most populated island, Batan is the gateway to Batanes and arrival point for most travellers. The main town is Basco, a charming settlement with just over 8500 inhabitants. Nothing’s really going on in this quaint town, but only one kilometre north of the centre stands the picturesque Basco Lighthouse. You can ascend the lighthouse and enjoy the views over the coast and the waves crashing on the rocks. Drive a bit further north for a walk through the Vayang Rolling Hills. The sloping landscapes here are quite symbolic for the wild Batanes province, and from the viewpoint, you’ll get to see the sea, grazing cattle on the lush green hills, and in the distance the towering cone of Mount Iraya.

Another beloved spot on Batan is Valugan Boulder Beach, which is precisely what the name suggests; instead of the perfect sandy beaches you see elsewhere in the Philippines, this shoreline is dotted with large, ball-shaped lava rocks. It’s not a great place for swimming or sunbathing, but the exquisite boulders and cliffs in the background make for excellent photo opportunities. 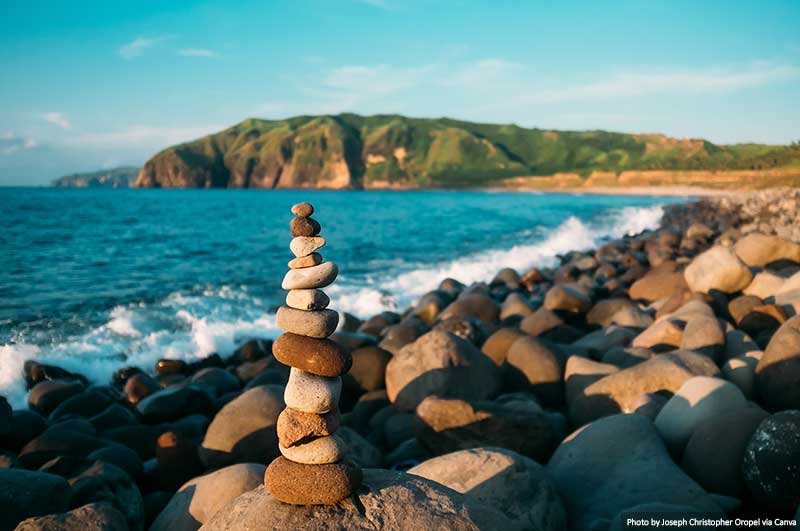 The point that Batanes is all about natural beauty is proven at the Marlboro Hills in the east of Batan. The green pasture lands with grazing cows, the mammoth cliffs, and excellent views of Batan’s hilly interior all lie within easy reach from the winding road that leads to the Marlboro Hills. Alapad Rock Formation is a nearby spot that’s worth stopping by; the hidden cove and impressive rock occupied with countless goats makes for an exciting spectacle. 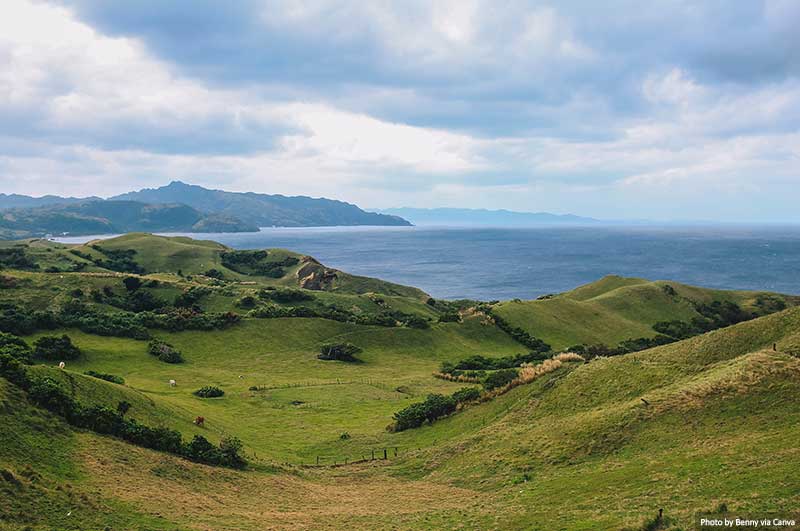 On the opposite coast, you can have a look inside the oldest stone house in the Batanes archipelago. Nowadays, the House of Dakay functions as a museum with traditional clothes, and tools of the Ivatan – the people of Batanes. The house was built in 1887 and often served as a shelter during the typhoons that regularly hit Batanes.

Although Batan’s western neighbour is a lot smaller, Sabtang is possibly even more pretty. Sabtang lacks the picture-perfect rolling hills that give Batan its particular character. Still, the tinier sibling makes up for that with gorgeous beaches and a peculiar village that entirely consists of traditional stone houses.

Even before arriving from Batan, the lighthouse of Sabtang appears from the horizon and welcomes travellers as the most prominent landmark. The stone lighthouse is still active, and the cosy shed beside it even functions as a homestay. By staying here, you’ll get to explore your own hidden lagoon, and climb the lighthouse. Travellers who don’t sleep here can still enter the premises and lighthouse after asking permission from the owners. 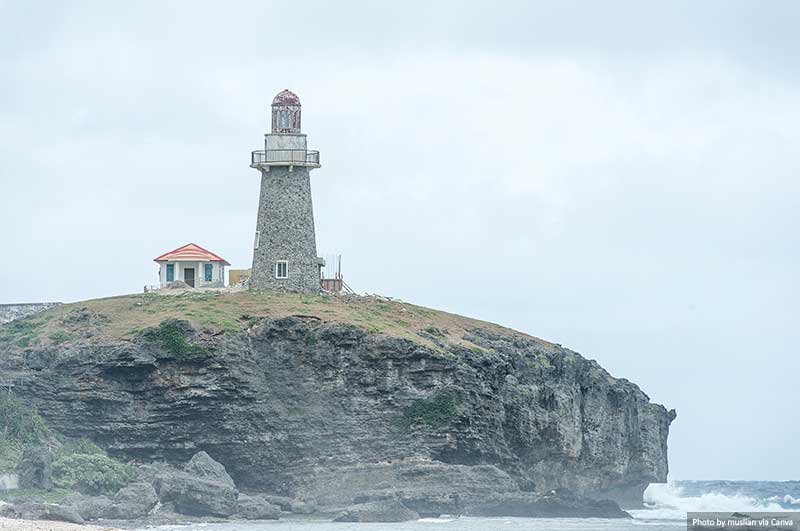 Three kilometres north of the port of Sabtang, Morong Beach is a must-visit during your journey across Batanes and particularly Sabtang. Batanes doesn’t have plenty of beaches – not near as many as most islands in the Philippines – but Morong Beach certainly is recommended to any beach lover. This waterfront has quite a long stretch of powdery sand, which contrasts beautifully with the vibrant vegetation on the dunes in the background. But what makes this beach stand out is the majestic arch, a natural rock formation which hangs over Morong Beach like a bridge. 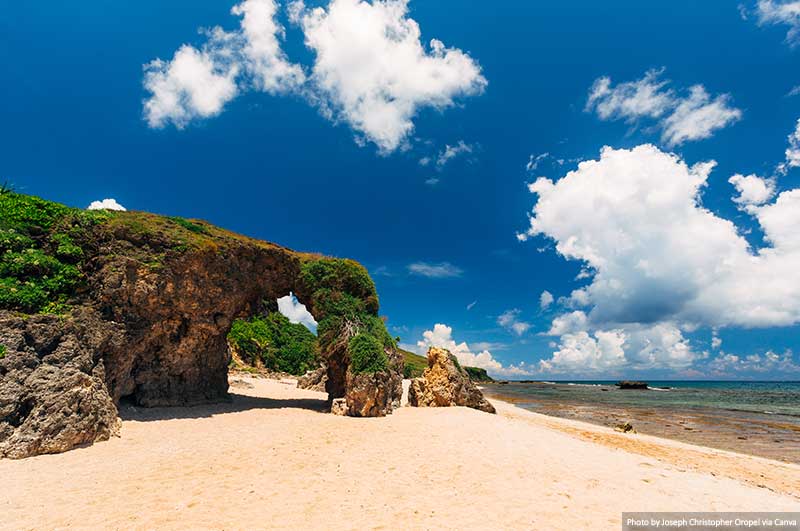 On the northernmost tip of Sabtang, Natao Point is a superior spot to sit down and enjoy the stunning scenery. From a rugged cliff, you look straight down into the abyss with its crystal clear ocean water and waves crashing into the rocks. To the south, Sabtang’s mountains reveal themselves when you’re standing at Natao Point, while you get a glimpse of the uninhabited Vohas Island to the west.

More to the south of the island, the Chamantad-Tinyan Viewpoint truly stands out when it comes to superb scenery on Sabtang. From the road, you walk down a rocky track, most likely accompanied by free-ranging cows or horses. The bay with its high rock outcrops almost looks like a scene from the wild north coast of Scotland or Iceland. You can ascend to the sandy beach, which – due to the lack of tourism in Batanes – you’ll most likely have all to yourself. 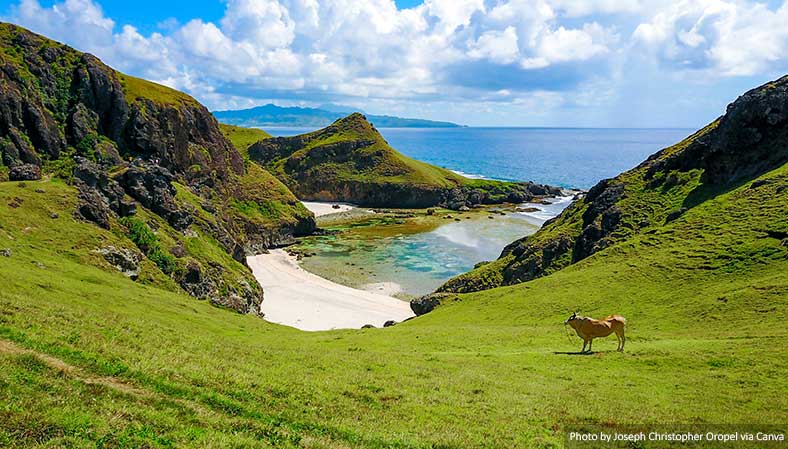 Sabtang only has one main road, and if you can continue south towards the village of Chavayan, you’ll hop by more beaches that are worth taking a break on, including some more ‘typical Filipino’ beaches with white sand.

Chavayan itself has plenty of charm to it, although many storms have tortured and shaped this community over decades. Almost all of the houses are made from pieces of coral and large stones, collected from the volcanic archipelago. The sturdy stone walls protect the Ivatan people from typhoons, as Batanes is exposed to the forces of nature. Apart from all the houses, Chavayan also features a slightly run-down theatre and a church with a colourful facade. The best thing to do here is merely walking around and soaking up the atmosphere and architecture. 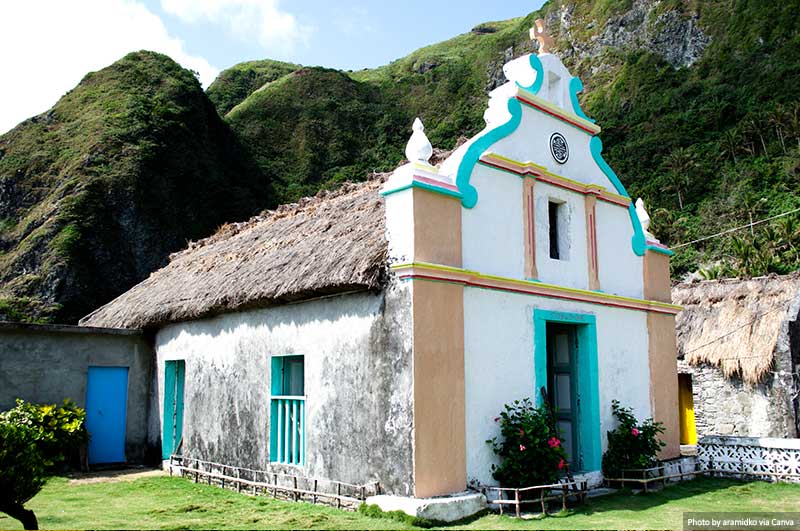 The third island is the northernmost inhabited place in the Philippines. Itbayat is nothing more than a massive coral reef that once got elevated by tectonic forces. Although Itbayat has fewer sights than Batan and Sabtang, this one-of-a-kind island still has some incredible scenery. For a proper introduction to Itbayat, you can go up to the Mount Karaboboan viewpoint. This is one of the highest places on the island.

The Torongan Hills and Torongan Cave are two other scenic places that show the beauty of this raw island. It takes a short ride to the end of the road, and after that, a hike from Itbayat town proper to get to these compelling locations, but the views of the jagged coastline and into the stunning cave are well-worth the climb.

If you’re looking for an active travel day on Itbayat, the hike to the Rapang Cliffs might be exactly to your liking. The trail leads through forests and over rugged terrain, and ultimately to the majestic Rapang cliffs on the east coast of Itbayat. The green crags are even more magnificent at sunrise or sunset, but keep in mind that the roundtrip hike from Itbayat town takes 5 to 7 hours.

Since it’s is the most remote inhabited island of Batanes and boat rides from Batan take at least three hours, Itbayat is the least visited island. However, the landscapes are very different and worth crossing the sea for.

How to get around Batanes

Batanes doesn’t have much public transportation, and the most common way to get around as a tourist is with a tricycle. You can arrange these motorbikes with a cabin for a few hours or an entire day. You can book a tricycle – including the driver – through your guesthouse, on all three main islands. The price per vehicle per day is about 35 GBP, and you can ride the tricycle with three passengers. The best way is to tell the driver what places you wish to visit.

Another option on Batan is a tour van, which generally takes the whole day and shows you most of the highlights. For short distances, you can hire mountain bikes.

Jeepneys – public buses – go around Batan, connecting communities like Basco, Mahatao and Ivana. However, services are minimal, and the schedule is somewhat unreliable. 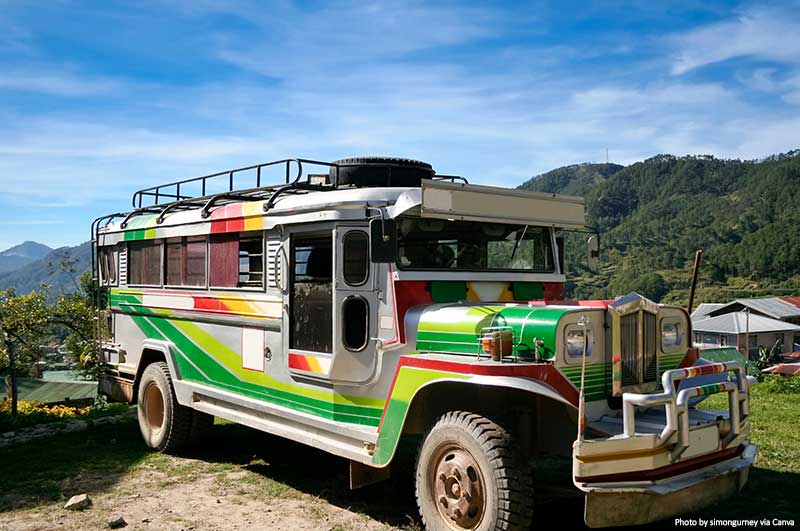 How to get to Batanes?

Due to its remote location, prices on Batanes are higher than elsewhere in the Philippines and accommodation is more limited. But if you want to see a wilder, unspoiled side of this country and you’re looking for an adventurous trip, this province is a fascinating atoll in the middle of the ocean.

Although tourist numbers are increasing, the number of visitors is nowhere near that of places like El Nido and Boracay.

We recommend the below options to book your hotels, activities and flights:

How to Build a Basement Bar